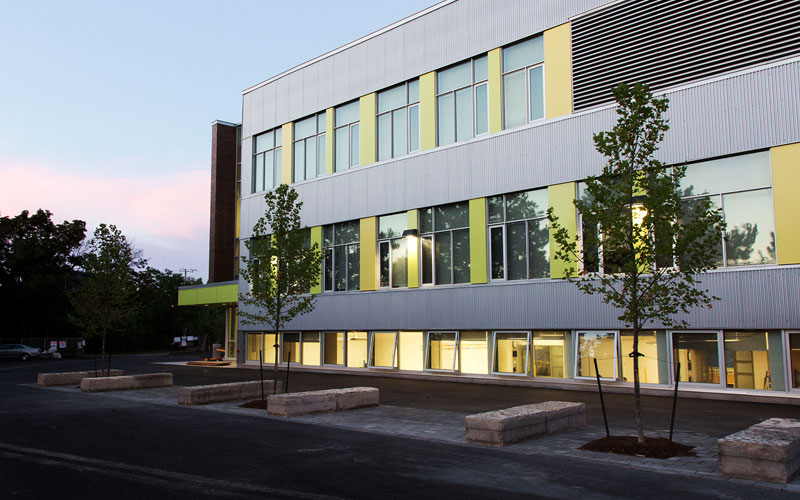 To address the increase in student population, a two storey addition will be built on the south end of the school, comprised of 15 classrooms, including a state-of-the art science-art-tech suite. The street-facing facade will make use of standard masonry cavity construction with rich iron-spot bricks, exhibiting the strong masonry character of the existing school, while adding a touch of colour through the use of painted sun screens on the south edges of the windows, which not only add visual interest, but also provide passive cooling.

The portion of the building facing the park will be clad in aluminum panels, distinct from the rest of the building, shimmering through the trees, and continue the play of colours introduced in the street-side facade. A continuous band of windows at the base of the building lightens the visual mass of the addition, while allowing as much light as possible into the lowest level of the school.

The FDK fit-up will involve converting an existing meeting room into a shared cubby and washroom area between 2 classrooms. In addition, the two classrooms will receive new millwork specifically designed to suit program needs and new cubbies will be provided for existing kindergarten rooms.

The project will see the implementation of Full Day Kindergarten for Fall 2014 and address the current overcrowding and expected future increase in student population, to the K-8 school for January 2016.