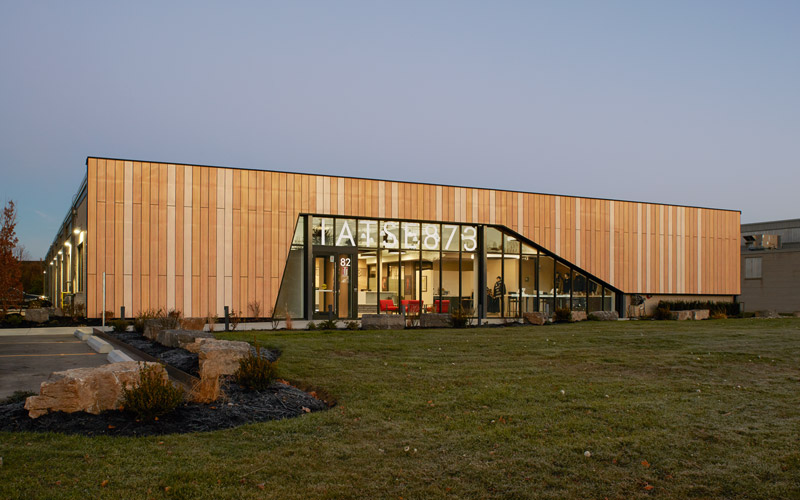 IATSE (the International Alliance of Theatrical Stage Employees and Moving Picture Technicians), was originally founded in 1893. It is the union representing a wide range of people who work behind the scenes to help produce film and video production.

Having recently acquired a stand-alone warehouse building, IATSE 873 approached Taylor Smyth Architects for a creative design and retrofit that would allow them to accommodate their staff and provide training space for new and existing union members, as well as to create a facility that speaks to who they are and to their pride in what they do.

The front of the building was removed and replaced by a new façade of Trespa phenolic panels. Resembling planks of various wood types, the new screen is cut away to create a dramatic glazed opening into the building, an abstract reference to a stage proscenium. It also indirectly references the spirit of what IATSE does – the creation of illusion with a resourceful use of materials. Along the sides of the building, new windows were also added to bring natural light deep into the floorplate.

The many types of craftspeople who together make up the totality of IATSE 873 are each named on the reception wall to celebrate their membership. Within the open plan office area, the steel bones of the building are exposed with floating acoustic ceilings providing localized intimacy. The Call Centre, the heart of IATSE, occupies the symbolic centre of the workspace. It is partially defined by an open wood stud wall that alludes to the construction of film and television sets.

Early in the design process, a sustainable design study was undertaken to analyze potential energy conservation savings. Multiple options were tested on an energy model to determine upfront costs and payback periods. This helped define the optimal mechanical system, along with lighting control strategies and passive design measures.